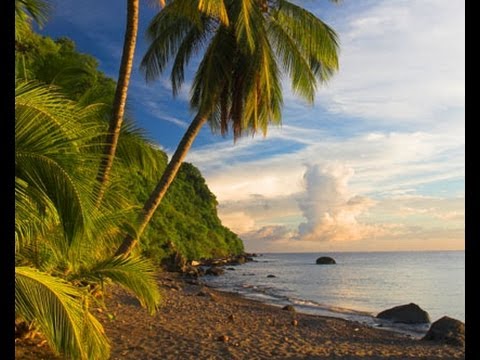 The island sits midway along the Eastern Caribbean archipelago, just a few miles from Martinique to the south and Guadeloupe to the north. Its official name is the Commonwealth of Dominica, which is mostly referenced in official communiqués and to distinguish the island from its northerly Caribbean sister, the Dominican Republic.

Known as "The Nature Island," Dominica's tropical rainforests cover two thirds of the island, and are home to 1,200 plant species. Rivers, lakes, streams, and waterfalls abound, fed by the island's high annual rainfall. Its volcanic physique points to extensive geothermal activity — even underwater. The Morne Trois Pitons National Park was the first UNESCO World Heritage Site in the eastern Caribbean.

Dominica offers much more than a stunning nature adventure. Its rich culture is a blend of English, French, African, and Carib peoples. Colorful costumes, music, and pageantry are on display at a host of celebrations, from Carnival to the World Creole Music Festival, and the many independence celebrations around the island. Though Dominica received its independence from Britain on November 3rd 1978, the country commemorates this date with an extended period of cultural celebrations which can last as long as four weeks.

Dominica boasts wonderful examples of Caribbean architecture with a distinctive mix of French, English and Spanish influences. Monumental buildings from colonial times, as well as some old plantation estates, are a must see. A self-guided walking tour through historic Roseau, from the Society for Architectural Preservation and Enhancement (SHAPE) office in Roseau, allows you to experience the rich history and architecture of the capital city.

Dominica is the only Caribbean island with a remaining population of pre-Columbian Carib Indians. Migrating in waves from South America as early as 3,000 B.C., various tribes made Dominica their home, and by 1,000 A.D. were well settled, calling the island "Wai'tukubuli" meaning 'tall is her body' in the Kalinago language. Today, over 2,000 Caribs, properly known as the Kalinago, inhabit a 3,700 acre territory on the northwestern side of the island.

Dominica is served by two airports: Melville Hall (DOM) and Canefield (DCF) Airport. Most visitors to Dominica will arrive through Melville Hall as it is the larger of the two airports and accommodates commercial airlines. Canefield Airport, 15 minutes from the capital city of Roseau, is only 3,100 ft long and serves only smaller aircraft offering intra-regional flights and courier services. Melville Hall, located in the northeastern side of the island, one hour and 20 minutes from the city, features a longer runway and updated terminal.

International flights from US and Europe are connected to the island through hubs in Antigua, Barbados, St. Maarten, Guadeloupe and Martinique. Leeward Island Air Transport (LIAT) usually completes the Dominican leg of these flights and BVI Airways provides service from St. Maarten. LIAT and American Eagle also provide connecting flights to the island out of Puerto Rico.