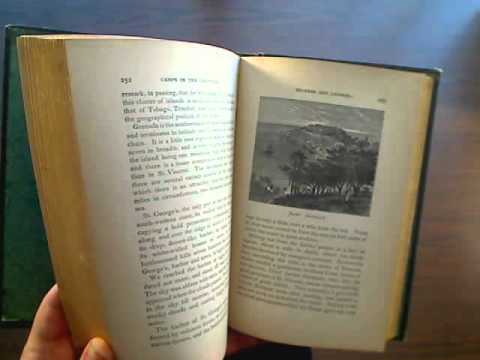 CAMP LIFE IN THE TROPICS

IN AND ABOUT MY FIRST CAMP

THE BOILING LAKE OF DOMINICA

SOCIAL LIFE, APPEARANCE, AND LANGUAGE OF THE CARIBS

HOW I CAPTURED THE IMPERIAL PARROT

A DAY IN THE DEEP WOODS

A MIDNIGHT MARCH, AND WHAT CAME OF IT

A CRUISE IN THE HURRICANE SEASON

A CAMP IN A CRATER

A MONTH ON A SUGAR ESTATE

GRENADA AND THE GRENADINES

A MONKEY HUNT IN THE MOUNTAINS

SOME SUMMER DAYS IN MARTINIQUE

THE BIRTHPLACE OF THE EMPRESS JOSEPHINE

ASCENT OF THE GUADELOUPE SOUFRIERE

Engraved by Johx Andrew, From The Author's Photographs And Sketches

The Island Of Cocoa Palms Frontispiece

An Army Of Crabs

The Biggest Bug In The World

A Family Group Of Indians

The Lake In A Crater

Palmiste Glory Of The Mountains

The Widow And Her Weed

The Early Home Of An Empress

The islands to which reference is made in the following chapters are those known as the Caribbees, or Lesser Antilles, extending over eight degrees of latitude, between Porto Rico and Trinidad, connecting the Greater Antilles with the continent of South America.

This archipelago, containing the loveliest islands in the western hemisphere, with settlements ante-dating Jamestown and Plymouth, with structure and physical features interesting to men of science the world over, has yet remained, as at the period of discovery, almost an unknown field to the naturalist.

In 1876, under the auspices of the Smithsonian Institution, I undertook the exploration of these islands with the especial view of bringing to light their ornithological treasures. The investigation covered a space of nearly two years, during which time I visited mountains, forests, and people, that few, if any, tourists ever reached before. It was only by leaving the beaten path of travel, and taking to the woods, that I was enabled to accomplish what I did in the way of discovery; for which the curious reader is referred to the Appendix, and to the various catalogues of new birds discovered, published by the National Museum.

While around the borders of each island there is a cleared belt of fertile land, sometimes densely populated, and on the coast are often large villages and even cities, the interior is generally one vast forest, covering hills and mountains so wild and forbidding of aspect that few clearings are made in them save the "provision grounds" of the negroes and Indians. Many tourists and writers have visited these islands, have stopped a while in the towns, have interviewed the natives, and then have hastened off to England or the States, and written books about them. Several naturalists of note have likewise visited the shores of these interesting isles, but, like the writers aforementioned, have never penetrated beyond the line of civilization.

Conjecturing that the public have had enough of descriptions at second hand, from writers who are more ears than eyes, I have hastened away from town and city, and sought an early opportunity for taking my readers to the forest, where everything reposes in nearly the same primitive simplicity and freshness as when discovered by Columbus, nearly four centuries ago.

I took my camera with me, and whenever a new bit of scenery presented itself, a beautiful tree, or cascade, or a composition peculiarly tropical, I photographed it; and my publishers have used as subjects for illustration only these photographs from nature, which have never been presented before. As with the illustrations, so with the sketches in type. I have but photographed the scenes I visited and the people I saw and lived among. Now and then, in following a thread of history that connects these islands and people with an almost forgotten past, I have availed myself of the language of the historian, but in rare instances. My only claim is, that these sketches are original, and fresh from new fields new, yet old in American history, and that they are accurate, so far as my power of description extends. They have not, like the engravings, had the benefit of touches from more skillful hands, and they may be crude and unfinished, and lack the delicate shadings and halftones a more cunning artist could have given them; but they are, at least, true to nature.

Be the first to comment on "Camps In The Caribbees, 1880, Frederick Ober, (Caribbean Islands, Grenada, Dominica, Martinique)"